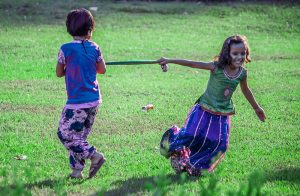 Being active is something that few people will dispute the importance of. Physical activity and health are related, in that those who are less active having more health problems. While adults need to stay active, it is even more important to keep children active through outdoor play opportunities such as Treetops in Guildford.

While this seems to be the most obvious reason to keep children active, it is still important. Children who are active will be less likely to be obese or overweight. While many people understand this is important, they may not know that more children are becoming less active and gaining more weight. According to the World Health Organisation, the UK is set to become the most obese country in Europe by 2030, which is a very worrying statement.

The rise in obesity will lead to an increase in chronic health problems such as type-2 diabetes and heart disease. These are some of the lifelong issues children can avoid when they are kept active. A lot of people believe that adults have to put in more effort to look after their health as they age. However, getting children used to staying active will set the good foundations for their future and ensure they can easily maintain their health as they age.

Pre-teens and teenagers develop faster than adults. The first few years of life are the formative years that define the health of the body going forward. Children who are more active during their formative years will have stronger bones and muscles. This will ensure they are healthier as they age and will reduce their susceptibility to diseases and injuries such as osteoporosis. The development of these diseases is influenced by the strength of the bones when people are young.

One of the reasons why children are less active today than they were in the past is due to the rise of technology. A lot of people understand there is a direct link between this and the rise in obesity. However, the problem is that the effects can be subtle enough for it to be overlooked.

An example of this will be posture which is affected by sitting in front of the TV for too long. This can be a cause for concern, but the rise of tablet and phone use is more worrying. Portable screens allow children to spend long periods in one position and this will have a negative impact on their posture.

A lot of parents will agree that a fall in activity in children will instil a laziness that sticks with them for the rest of their lives. As they get older, children will become less capable of engaging in physical activity. This can be due to obesity or issues with bone strength, but in most cases, a lack of activity is due to a lack of desire.

The longer any habit, good or bad, is repeated, the harder it is to break it. This is something that will affect the current generation when they become adults. Children will not only be less active, but they are also going to be less sociable and feel more isolated as they age. This is due to the amount of time spent home alone or in the company of other people without really interacting with them.

The realities of modern life can have an effect on the physical health of the future generations, but it is hard to determine the exact effect. Understanding topics like physical health and diet is improving, but the health of the general population is still declining. This is why most people are not looking at whether or not things are going to be worse in the future, but how much worse they will be.