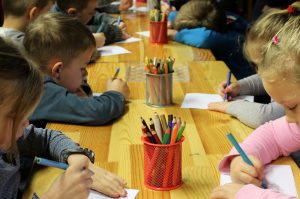 Families that have a heritage language can stand to benefit from bilingual children. A heritage language is one spoken by older and previous generations of a family, but it’s not the same as the local community language.

When parents don’t have much fluency in the local community language, then teaching their children a minority heritage language helps the family stay close together. It’s regrettable when family communications and relationships whittle down over time simply due to linguistic differences in the same family. This is a way parents can stay active in the lives of their children, since the kids can converse in the heritage language of their parents.

Not every parent becomes bilingual due to learning a second language as their own heritage. Some might have lived in various countries at times, picked up other languages at college or school, or they just might be passionate about different cultures and how they speak and communicate. When such adults have children, they might want their kids to wind up experiencing the very same feelings and advantages of picking up a second language.

If you are able to communicate in multiple languages, travel gets much easier.

Knowing a second language might mean new job opportunities. Globalisation has introduced many changes and brand-new work positions. In many countries, bilingual professionals are highly sought after, especially if they know certain languages, such as English, French, Chinese, or Arabic. Knowing this, many parents decide to enroll their children into specific foreign language education even at the ages of 2 to 3. English is of course the predominant language of commerce internationally, but the demand for having multilingual professionals across all industries is on the rise. This happens even in America, and it’s going to keep growing as more time passes.

Learning a pair of languages early in a person’s life makes it much simpler to learn others later. If you’d like your kid to be able to communicate in multiple languages as an adult, start having them learn a second one right now at bilingual nurseries or schools.

You probably think that someone who knows more than one language is smarter than other people. Quite a few people believe this, actually. There’s finally science to support this idea.

Specialists in child development have quite a few ideas about how bilingual education can shape and train the brain of a child. The process through which people learn is always under study, and our comprehension of them gets refined in time.

However, we are already aware of numerous particular benefits that bilingual advantages get to enjoy. Kids raised as bilingual from early ages especially get to enjoy these:

-Scoring above average on tests that include problem-solving and creative thinking: Being able to translate abstract concepts between languages means developing skills that let them view tangible problems in multiple abstract ways.

-Early reading skills are improved for bilingual kids: Learning a pair of languages or more helps them learn how language is a functioning tool, something they can use. It’s not just a passive element of their larger environment which they get no say over.

-Bilingual kids can develop more robust skills in both languages: Since these children have more than one way in which to communicate, they might actually seem to progress slower than their peers in early stages of linguistic development. However, they also almost always wind up with more proficiency in their predominant language when compared to monolingual peers.

Truly understanding a different culture only comes with mastery of their language. Bilingual kids are simply better able to participate in other cultures, as compared to monolinguals.

Bilingual kids are more inclined to show interest in cultures who use their second language, whether it’s a heritage tongue or otherwise. This early-life interest can open up a diverse educational directions. Street festivals, fairs, and museums can help a bilingual child’s inherent interest in other cultures that monolingual peers might not have.

The world is more globalised every day, so the power to handle multicultural experiences with ease is a very powerful tool for anyone.